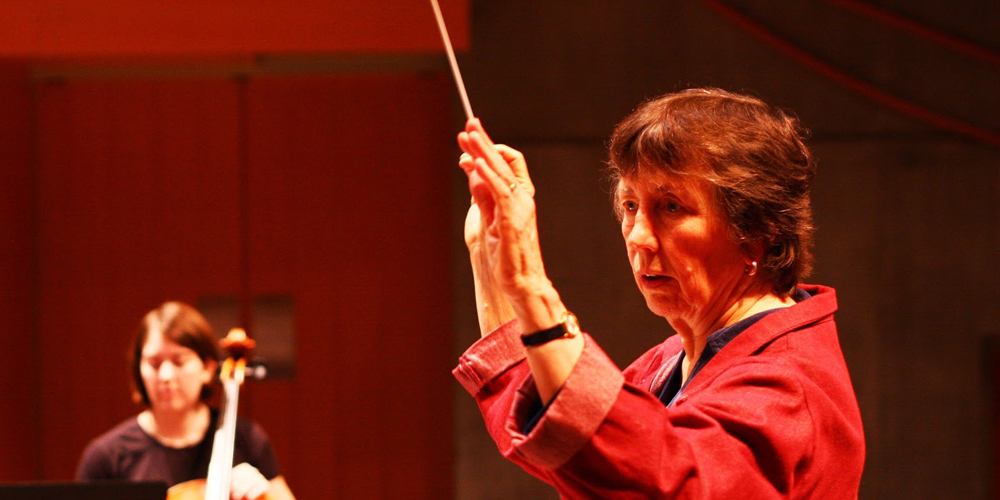 I had the opportunity to speak at length with Joan Tower only once before interviewing her on the phone for this article. Several years ago, we were both at the Toyota Dealership having our cars serviced. At the time, I knew just a little about Joan’s history at Bard College, her importance to the music world, and that she was special. What impressed me was how personable, friendly, folksy, and funny she is.

She is that and much more to her students at Bard, as well as to the world stage as one of “America’s foremost and colorful composers.” The inclusion of her composition Fanfare for the Uncommon Woman No.1 (1986) in the recent inaugural celebration for President Joseph R. Biden and Vice President Kamala D. Harris is a further reminder of her importance in the realm of living American composers. She also has a strong relationship with Bard LLI over the years, where she has created a most successful connection between her students and the Bard LLI community.

Joan, at Bard and on the World Stage

Joan Tower began teaching at Bard in 1972, which means that she preceded Leon Botstein’s arrival as President of Bard College by three years. She is not only a composer and teacher, but also a pianist, conductor, and chamber music player. She played piano with the Da Capo Players for 15 years. Joan is currently the Asher B. Edelman Professor in the Arts in the Bard College Conservatory of Music. She has won numerous awards for her compositions and recordings and has been commissioned by many major ensembles for her works. She was named Musical America’s Composer of the Year in 2020.

Two years ago, the Bard community honored Joan for her 80th birthday with a special concert at the Fisher Center, concluding in an all-audience rendition of “Happy Birthday.” LLI recognized Joan for that birthday by increasing the annual scholarship given in her name to $3,000, giving her flowers at that year’s LLI Annual Meeting, and offering an LLI class in notable women composers, including Joan, of course.

Joan’s Fanfare for the Uncommon Woman No.1 (1986), which was played during the week of the 2021 inaugural festivities, was commissioned by the Houston Symphony. It is part of a series of six fanfares. She initially thought this was her big opportunity to write for a lot of brass. Actually, each of the six fanfares is orchestrated differently and has a unique flavor. Fanfare No.1 (1986) was inspired by and written as a tribute to Aaron Copland, composer of Fanfare for the Common Man, whom Joan considers an elegant, honest, musical voice. Joan’s Fanfare No.1 (1986) is dedicated to the conductor Marin Alsop, and to all women who are adventurous and take risks. Alsop conducts both fanfares in the attached link prepared by Classical Movements. In this performance, Joan sees Copland’s piece as a nod to President Biden and her fanfare, admittedly a feminist work, as honoring Vice President Harris.

How Do You Go About Composing, Joan?

When asked about how she approaches composing, Joan uses phrases like “grounding of intuition” and “like writing a novel.” She composes at the piano because it is “more alive in time, more visceral and real.” Creating compositional maps doesn’t work for her because “That involves logic and I don’t trust that as always being a musical logic.” She starts with a character and makes that character more memorable, taking time and more time, relying on patience for instincts to kick in and then settle. Joan’s creative process is said to produce works full of raw emotions that are difficult to pin down stylistically. Joan terms her style as “organic.”  “Music has its own abstract environment,” she says. When asked about what she is most proud of in her life, she quickly answers, “My music.”

Joan has a very special friendship with Bard LLI. She loves the members because “That’s my age group!” She has offered classes to the LLI community for many years. The courses bring Bard Conservatory students to perform and talk about selected chamber, classical, and original works in front of an enthusiastic audience. Jane Diamond and Bob Blacker, who have produced her LLI courses over the years, rave about how cooperative and how much fun she is, and about how easy it is to work with her. Joan designed these courses to be a win-win for all involved. Her Bard students have a platform to perform, and her LLI participants are treated to some amazing and magical musical moments. Joan loves to see her students have a chance to shine in the safe, warm space she has created. Bard Hall is the chosen venue because of its intimacy and acoustics. Joan shares a bio written by each student performer at the beginning of class and talks a bit about the pieces to be performed. At the end, she rounds up a line of chairs facing the audience so that questions can be asked of, and answered by, the musicians. This format, she says, makes her performers appear personable and teaches them to talk in front of an audience about all facets of music. Her students have been surprised at the smart, interesting, and sometimes fearless, questions posed. Joan, who does not have children of her own, says, “These are my kids!” proud of her self-described role as Mother Hen.

Joan has been spending time at home composing, practicing piano, and caring for her 93-year-old husband. She taught in-person at Bard earlier this year and now is not minding teaching online. However, she finds speaking publicly to an audience on Zoom challenging and kind of like “talking to furniture.” After a Zoom talk she recently gave for TON (The Orchestra Now), where she was convinced that her audience was asleep or dead, she was surprised to get enthusiastic reviews and feedback. (“They were paying attention!”) She wonders when we will return to live classes. For now, look for her course, Creating and Playing Music, in the upcoming Bard LLI spring semester catalog. Take advantage of the opportunity to hear wonderful music and see Joan showcasing her student flock with enthusiastic, loving care.