A Night (or Two) at the Opera 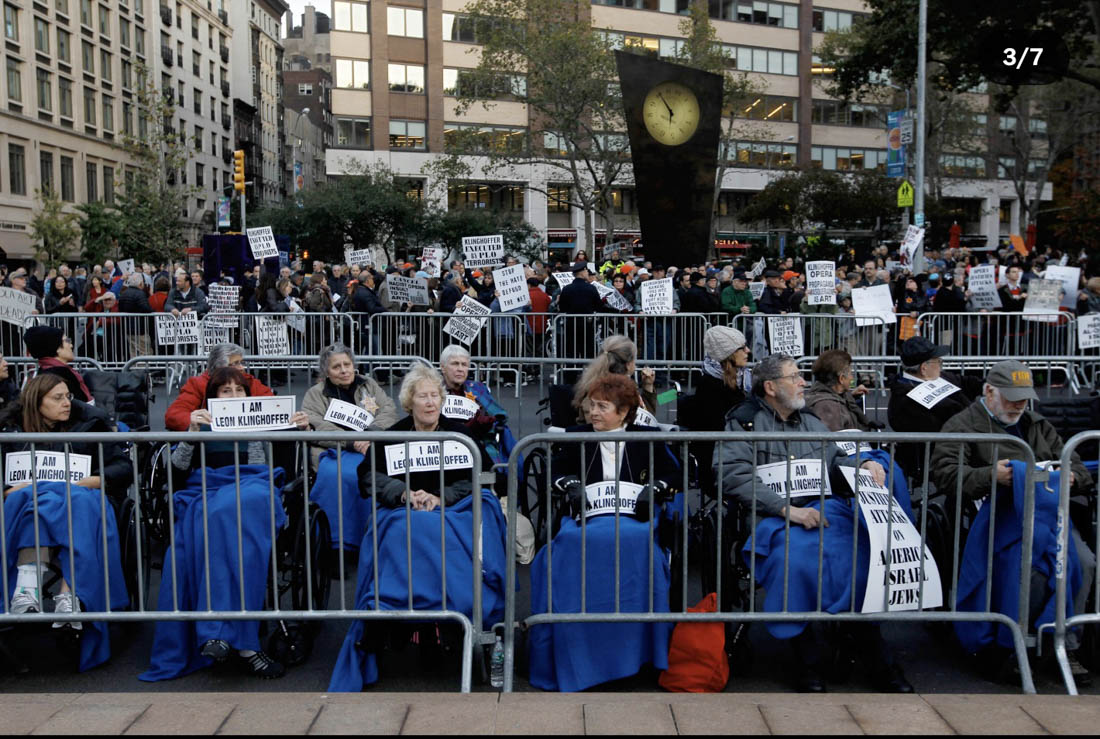 I’m on my way to Lincoln Center to see a new opera production. There’s been lots of chatter about it and I’m looking forward to an interesting evening.

A performance at the Metropolitan Opera House is always special, with the grand staircase, the crystal chandeliers, the gold and red balconies, the enormous stage and orchestra, and an audience dressed up for the occasion. Anticipation is running high. It’s sure to be, as always, a great entertainment.

But tonight, October 24, 2014, there are police cars and security swarming all over Lincoln Center Plaza. Protestors are waving placards denouncing tonight’s performance, while politicians and interest groups are shouting and growling into microphones, condemning the Met’s decision to present this opera by composer John Adams. The opera is The Death of Klinghoffer, about the attack by Palestinian hijackers of the Italian cruise ship Achille Lauro in 1985, and the point-blank killing of a disabled Jewish passenger, Leon Klinghoffer. His body and wheelchair were thrown overboard before his wife was even aware of what was happening.

The Met is careful to try to justify its artistic judgment in presenting this opera. I’m seated in the orchestra section and reading an apologia projected on the stage’s curtain:

The opera is not an exact reconstruction of events of the hijacking; the characters are fictional responses to the records left by some of the people involved in the hijacking.

I watch the opera, which is difficult and emotional. There is a brief vocal disturbance from someone in the audience, but the performance continues, and it is important and worthy. The hijackers’ anger and Marilyn Klinghoffer’s lament at the end of the opera move me and others in the audience with the deep emotion that opera can uniquely inspire.

One protester at the rally said she believed the opera made excuses for terrorism. “By putting this on a stage in the middle of Manhattan, the message is, ‘Go out, murder someone, be a terrorist and we’ll write a play about you,’ ” she said.

I begin to realize that, despite opera’s reputation as an elite entertainment, people pay attention and respond to opera’s messaging, even if they do not spend dollars and hours inside the opera house.

Adams’ The Death of Klinghoffer quickly disappears from the Met’s repertory, never to be seen again.

OK, so Klinghoffer is an opera on a difficult political theme. No wonder it is controversial.

Politics on the Stage

Several months later, in January 2015, I’m at the Met to see a one-act opera by Russian composer Tchaikovsky, Iolanta, about a blind young woman in the care of a strict father. It is paired with another one-act opera, Bartok’s Bluebeard’s Castle. There is an intermission between the two operas.

The title role of Iolanta is sung by Anna Netrebko, the great Russian soprano who is a friend of Putin—she will sing the Russian anthem at the opening of the Winter Olympics in Sochi, Russia. On the podium is the noted Russian conductor Valery Gergiev, also a friend of Putin.

During the intermission at the end of Iolanta, the first of the two being presented, a protester marches onto the stage of the Metropolitan Opera (perhaps the most famous stage in the world) and unfurls a banner protesting Vladimir Putin and his 2014 annexation of Ukrainian Crimea. He turns to point at Netrebko and Gergiev who are taking their bows. The audience and Met security are astonished at this breach, and the protestor is walked off the stage and arrested.

I understand then that the feelings aroused by the stories at the opera house are not just about love, intrigue, betrayal, and death. There is politics on the stage, while in the audience high emotion and complicated reactions reign.

I knew about the political involvement of the two great opera composers of the 19th century, Giuseppe Verdi in (what would become) Italy and Richard Wagner in (what would become) Germany. Verdi was active in the revolutionary movement to unite Italy from under the yoke of foreign rulers, and Wagner was wanted by the authorities for participating in the 1848 revolutions simmering through Europe. But now I understood how prominent the political themes were in Mozart and Beethoven and how integral political messaging is to opera, from its 1600 inception to the present day.

After my experience with the Klinghoffer and Iolanta operas, I proposed to Bard LLI’s Curriculum Committee that I do a semester on opera’s political messaging in the Fall of 2015. I’ve been presenting Opera as Politics every semester since.